MONTRÉAL, May 7, 2018 /CNW Telbec/ - To kick off Mental Health Week, Bell Let's Talk and The Rossy Family Foundation today announced a joint $500,000 donation to the Fédération des cégeps and the Fondation de l'Université du Québec à Montréal (UQAM) to improve the mental health of college students in Québec. The funds will enable the broader implementation, and evaluation, of the Zenétudes program, which supports students making the transition from secondary school to college. 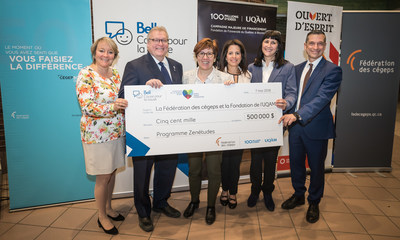 "Bell Let's Talk is proud to equip Québec college students with tools to support their success and future contribution to the development of our society and economy through this innovative program," said Ms. Turcotte. "We are pleased once again to partner with The Rossy Family Foundation – with whom we have already announced the development of a new national standard for post-secondary mental health – to expand the capacity of the Zenétudes program so that 9,000 more students can benefit from it as soon as they start their college studies."

"Nobody is immune from mental illness," said Minister Barrette. "I wish to thank Bell Let's Talk, The Rossy Family Foundation, and all those who work with these vulnerable young people. These initiatives make an important contribution to engaging the public in a frank, open discussion of mental illness, and deserve to be acknowledged and highlighted. An initiative like this is very valuable, complementing the measures taken by our government in the area of mental illness."

The Zenétudes program, founded by UQAM professor and researcher Diane Marcotte, Director of the Research Laboratory on Youth Mental Health in Schools, offers 3-part, in-class and small-group workshops to develop student mental health awareness and knowledge of strategies to prevent mental health issues. Zenétudes is currently offered in 10 CÉGEPs across Québec. The donation of $250,000 each from Bell Let's Talk and The Rossy Family Foundation will make it possible to support the extension of the program to more institutions. The funds will also be used to evaluate the implementation of Zenétudes at participating CÉGEPs and its impact on student mental health.

"We are proud to again partner with Bell Let's Talk, along with UQAM and the Fédération des cégeps to promote a more integrated approach to student mental health and well-being by providing young Québecers with the tools and support they need to make the crucial transition to post-secondary studies," said Ms. Rossy. "The Zenétudes program is a promising way forward and gives students the skills needed to succeed both inside and outside the classroom."

"The Zenétudes project is one of the '100 million ideas' that are emerging and coming alive at the heart of UQAM," said Ms. Fusaro. "We are pleased to see the work of Professor Marcotte recognized and her 'brilliant idea' propelled forward by Bell Let's Talk and The Rossy Family Foundation, and we applaud them for joining forces to improve the well-being of college students. Their commitment is invaluable and relevant to that of UQAM, a university that has always placed the advancement of knowledge and expertise at the centre of its mission to contribute to the development of our society. Our health researchers are at the forefront of efforts to improve the well-being of individuals and communities. With Zenétudes, which is based on a preventive approach to health, UQAM reaffirms this commitment with conviction."

Mental health is a major concern of the college network, particularly since over a third (35%) of students often or regularly suffer from anxiety. CÉGEPs already devote considerable effort to developing upstream strategies to address such issues as psychological distress and suicide. In this regard, they focus their attention on mental health awareness and prevention and intervention activities.

"We see an important link between mental health and educational success, since students in a good state of mind will be better prepared to deal with difficulties, depression and anxiety, and therefore will be more likely to succeed in their courses," noted Mr. Tremblay. "This donation will make it possible to work toward this goal by allowing the evaluation of the Zenétudes program."

"This initiative is an opportunity to promote the use of evidence-based prevention strategies and programs in educational settings, and to develop a rigorous approach to mental health services," said Professor Marcotte. "Through its multilevel approach, the Zenétudes: Making a Healthy Transition to College program proactively addresses student mental health issues, and reduces the stigma associated with mental illness."

About Bell Let's Talk
Bell Let's Talk promotes mental health based on 4 action pillars: anti-stigma, care and access, research, and workplace leadership. Bell Let's Talk was launched in September 2010 as a 5-year program with a $50 million initial donation from Bell and a commitment to grow its funding based on the engagement of Canadians in the cause on Bell Let's Talk Day.

About the Fédération des cégeps
The Fédération des cégeps is the voluntary umbrella organization of the 48 public CÉGEPs in Québec. It was founded in 1969 to promote the development of college and CÉGEP education. The Fédération acts as an official mouthpiece and discussion forum for CÉGEPs, to which it offers a range of services and advice on education, student affairs, international affairs, continuing education and professional development, financing, research and development, human resources, credential assessment, legal matters, information technology, as well as bargaining and labour relations. In its capacity as the CÉGEPs' representative, the Fédération also negotiates collective agreements. www.fedecegeps.qc.ca.

About UQAM
Creative, open and dynamic, the Université du Québec à Montréal (UQAM) is a leading-edge university of international renown. The originality and features specific to its 300 programs, its research activities focused on social concerns and its creative innovations have contributed to build UQAM's reputation. Located in the heart of Montréal, UQAM has over 42,000 students. www.uqam.ca

About the Fondation de l'UQAM
The Fondation de l'UQAM was founded in 1976. Its mission is to raise funds to contribute to the vitality of education, research and creation at UQAM, and to support the accessibility of university studies by offering scholarships and bursaries. Through the financial support of its generous donors, each year the Fondation contributes to the development of promising projects and academic success in many fields of knowledge. 100millions.uqam.ca #100millionsUQAM